Had several requests for the Tentacle, but it's just more or less a Dan Armstrong Green Ringer clone. But I had the idea of making a Green Ringer layout with the bypass footswitch board-mounted so we'll just call this layout the Tentacle. Should fit easily in a 1590A. If you'd rather a fabricated PCB to build on, check out the Darkmantle on the store. 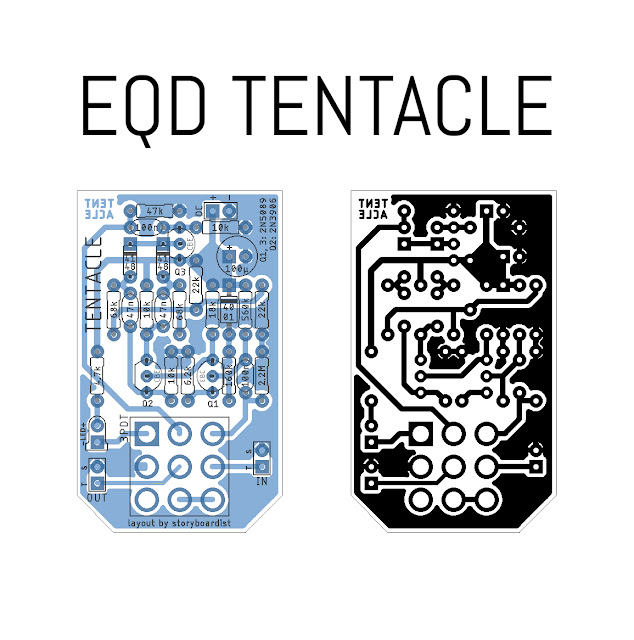 Here's an optical compressor I came across on FSB and hadn't seen a layout of it before. There's some question as to whether the schematic is accurate on FSB, so build with care. The original uses a rectifier array component, but I've broken that down into 4 discrete diodes (1N4148, 1N4001, etc.) since I figure more people will have those on hand than the rectifier component. Should fit nicely in a 1590B. Schematic and more info on FSB. 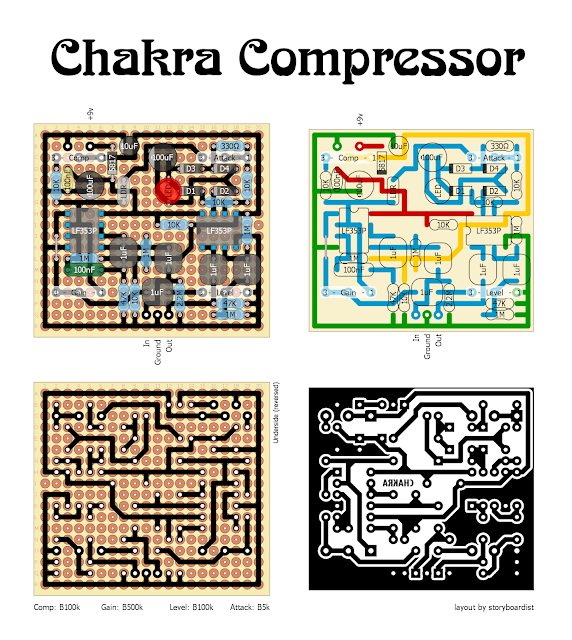 Here's an transistor-ization of the Butler Tube Driver by Jon Patton. Here's what he had to say about it:

I replaced the op amp buffer + inverting drive stage with a MOSFET booster, and replaced the tube stages with with FETs in the normal manner. Note that the design inverts phase, which the original did, too.

I moved the tone controls to put it before the last gain stage because otherwise it was just insanity on the gain levels. It's already pretty nuts even with all the cuts in front of each stage, but this gives a lot more control over the overall clipping.

The tone control and switch are really what make this cool... Really I'm just re-purposing once again the tone control from my Sakura amp, but everything worked out just right for me to get a third mode out of this one and to have a usable bass control.

1) The bass control just shaves off some low frequencies below about 400Hz. It's is a shelf filter, so the bass isn't gone, just de-emphasized, and at 5:00 the cutoff is at 18Hz.

2) Treble/Tone control: This is based on a version of the Big Muff tone control, with the resistor to ground for the lowpass removed. A lot can be done to radically alter the behavior of the tone control just by varying C9, so that's what the switch does. R8 is a small resistor (I picked 2.2K) to limit the ultimate range of the tone control so that it doesn't turn into a full low-pass filter, but it can be omitted for some very very dark settings in the scoop mode. I just don't like tone controls that bottom out.

a) Mode 1 flipped to one side: Flat treble at ~3:00 on the knob, at 5:00 a VERY tiny boost in the treble above 700Hz, and CCW cuts the treble at that same frequency, like a see-saw. With both tone controls down, it'll form a mid hump right around the middle of a Fender amp. (If I were to leave off the switch, this is what I would use as the stock mode.)

b) Mode 2 in the center: At ~3:00, the mids are boosted by about 3dB centered ~1KHz (bass and treble are flat). There's again a slight treble boost at full. CCW, the treble gets cut at 2KHz, so it's milder than mode 1, for just shaving off the harsher harmonics created by the distortion. This mode was a freebee on the layout by adding one capacitor, so I saw no reason to omit it. It's not as dramatic as the other modes, but it will usually sound flatter when there's a lot of distortion present.

c) Mode 3 (flipped the other way) has a mid scoop at ~250Hz for added clarity (this is the "mud" frequency for guitars, so it's a good frequency to cut). CCW, the treble is cut very deeply, which allows for bass boost with the bass at full and the tone turned down, or a treble boost with the tone up and the bass down. But with the treble and bass at about 9:00, it's back to a nearly flat response but with the gain cut a lot, for some "mostly clean" boost settings.

Jon used an on board LT1054 charge pump to run the circuit on +18v, but I'll leave the method/chip selection of doubling voltage up to you. The 2k and 10k trimmers are for biasing the JFETs, and the 100k trimmer is for biasing the MOSFET. Here's the schematic for reference. 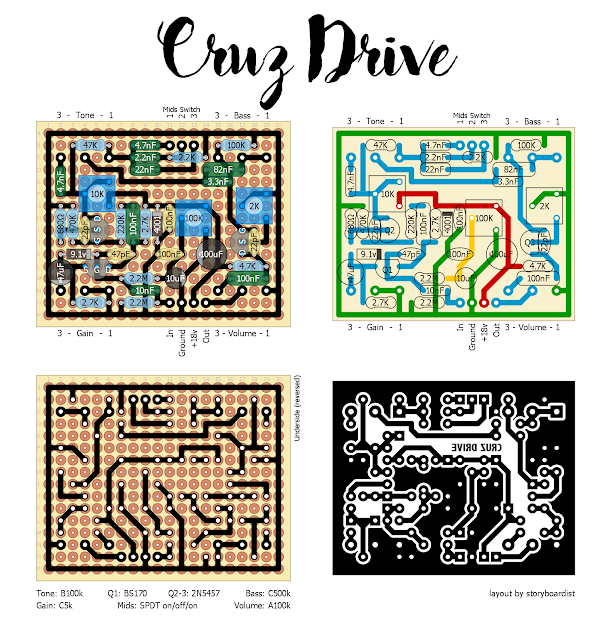 Happy Fuzz Friday! Here's a pretty cool Fuzz Face variant from an equally cool builder, VFE. Both transistors are switchable between silicon and germanium, and it's got a few other cool tweaks too. Schematic here for reference. Had a recent request for this one and thought it'd be a nice break from overdrives. Part of the Ibanez 10-series, it's a noise gate that utilizes the LM1894 noise control chip. You can still get the chip off eBay and the SMD version is available from Arrow, Mouser, etc. You can wire it for true bypass or if you want buffered bypass that option is available as well. Should work in either a 1590B or 125B. Schematic for reference. 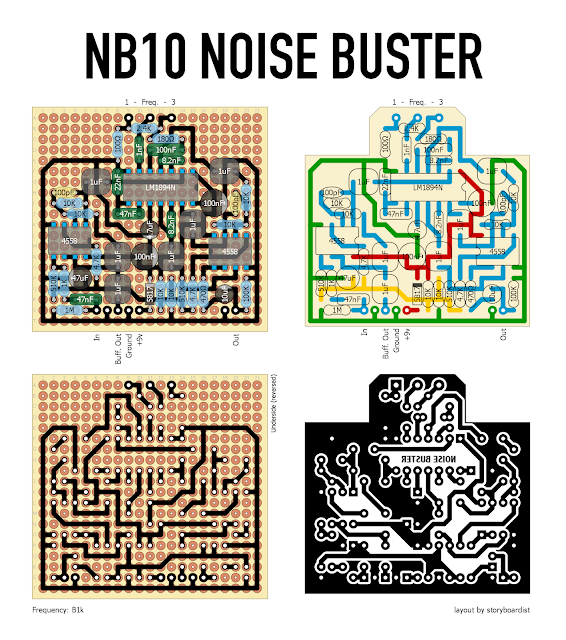 Got a little simple boost/preamp for your Thursday. Should be a pretty easy fit in a 1590A. J113 alternatives would be J201, 2N5457, and probably a couple other JFETs that are obsolete. 😑 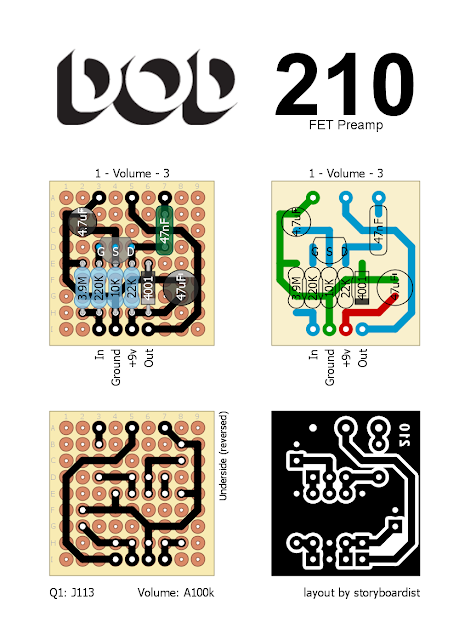 Stumbled across this circuit a little while back and thought it would be a nice change from most of the opamp-based overdrives out there. Should fit nicely in a 1590B. 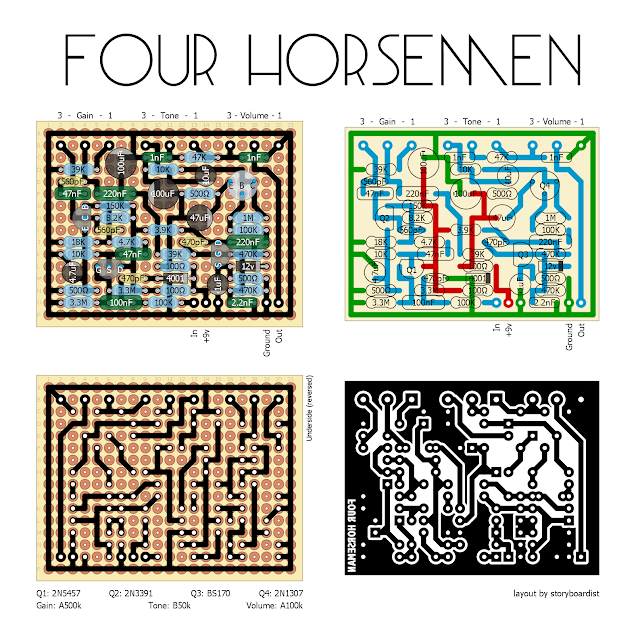 For Fuzz Friday here's the coolest Green Ringer + Rat pedal around! (To be fair, it's an awesome combo) The Green Ringer is on a JFET blend and the Rat section is pretty standard. There's also a fairly generic MOSFET boost on board as well, similar to a SHO or Black Eye. This should all fit nicely in a 1590BB with board mounted pots.


As requested, here's the schematic: 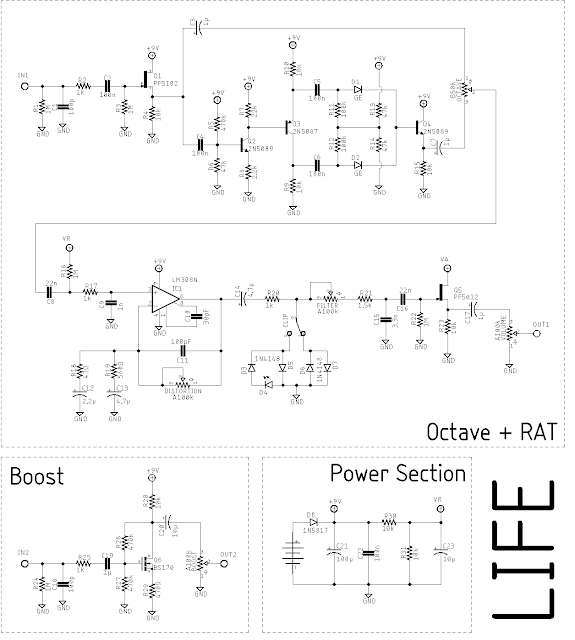 Today's layout is the EQD Plumes. It's based on the Tube Screamer but with a load of tweaks, including the usual BJT buffers replaced with op amp buffers, selectable clipping, and a charge pump to provide a bipolar supply. Should fit nicely in a 1590B. 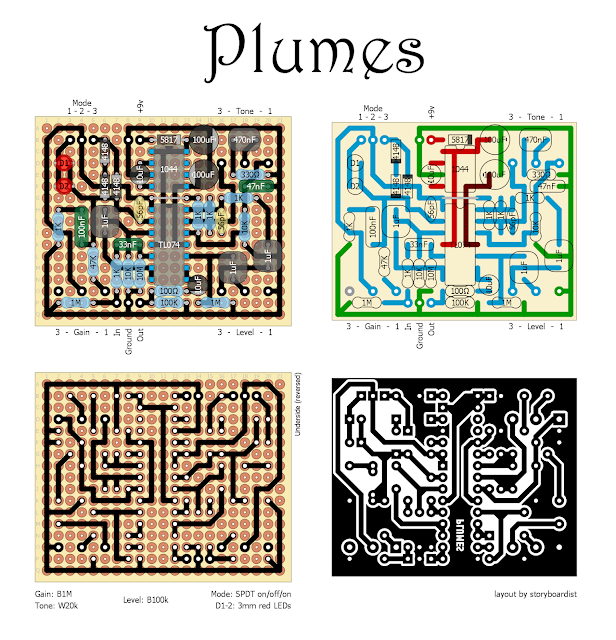 Here's the schematic as requested:

Email ThisBlogThis!Share to TwitterShare to FacebookShare to Pinterest
Labels: Earthquaker Devices, Overdrive, Verified
Newer Posts Older Posts Home
Subscribe to: Posts (Atom)
Having trouble scaling a PCB transfer image? Check out the Transfer Image Library page for pre-scaled PDFs of every PCB transfer image on the site. All you have to do is download the file and print. The files are organized by brand. Those brands that do not have two or more layouts on the site are grouped together in the "Misc." folder.