Here's the Tube Zone distortion from MI Audio. Original has 6 knobs with the Presence pot internally as a trimmer, but I know how you guys like to fiddle with knobs, and the layout was turning into a 1590BB size anyway, so I made it external. Schematic available on FSB. 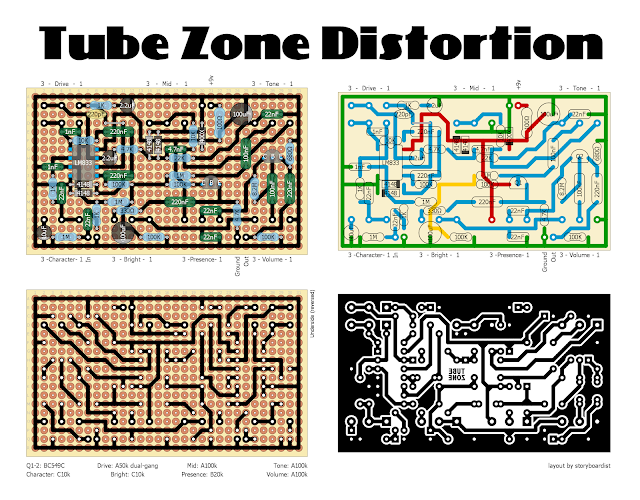 
There's also a fabricated version in the store, the LXII. 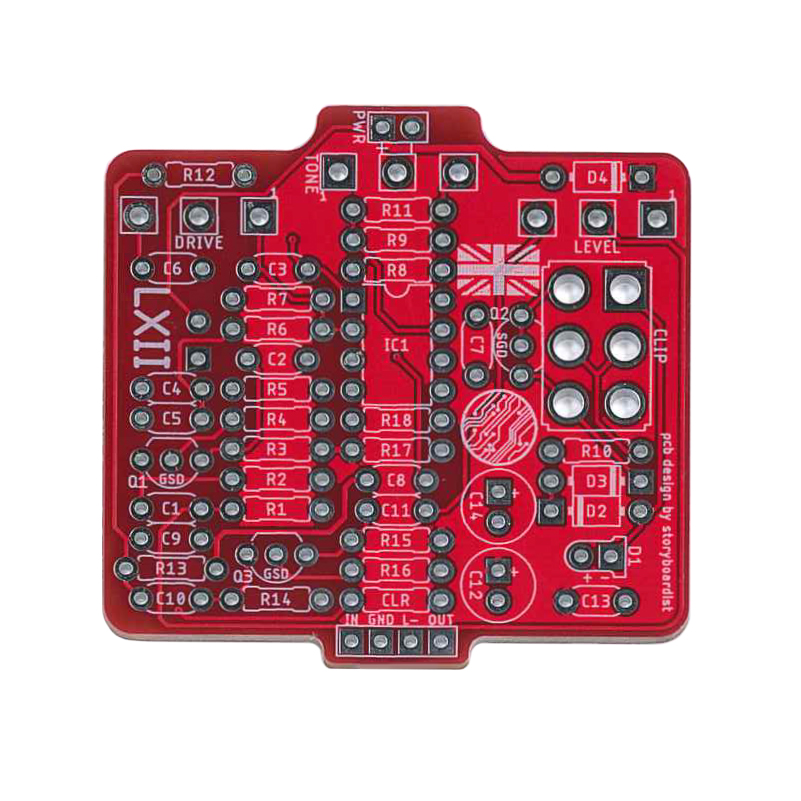 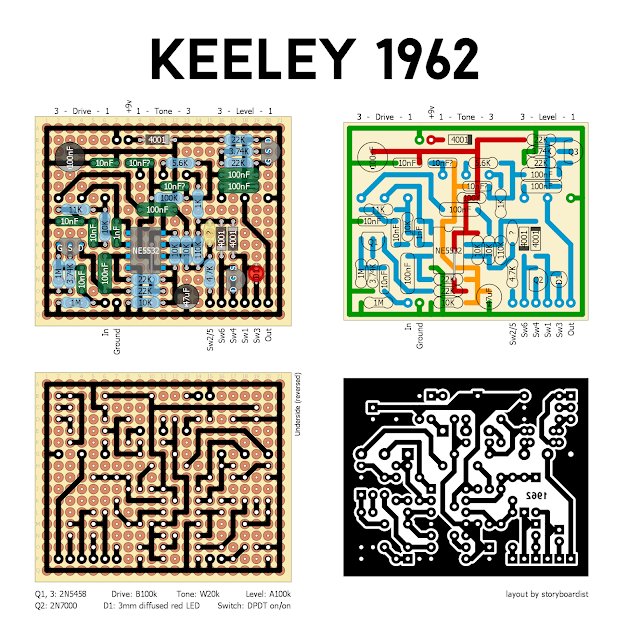 When I verified the fab'd version I didn't notice much difference tonally between the two clipping settings, so you may want to either leave it out or experiment with that section. I changed the value of the resistor from 9v to the drain of Q3 from 47k in the trace to 22k. Wouldn't bias properly otherwise. Also for the caps with questions marks in the layout above I used 10nF, except for the yellow cap to the right of the IC, which I used 100pF.
at 9:30 AM 24 comments:

Happy Fuzz Friday, everyone. Here's a modded Fuzz Face from Skreddy Pedals. Early versions are all germanium and later versions are a hybrid germanium/silicon setup. Since it's so similar to a Fuzz Face, there's a lot of room for experimentation. Here's the schematic for reference. 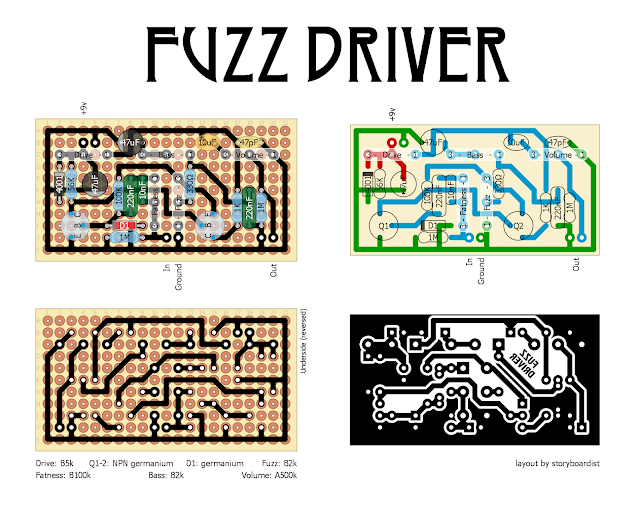 Got a request for this one. Another AC30/Rangemaster emulator to try and get Brian May's tone. Here's the schematic for reference. It calls for "BC245/256" JFETs for Q3-4, but I think that's a typo and should have the BF prefix. Should work with other JFETs as well. So socket and experiment with the usuals—J201, 2N5457, etc. 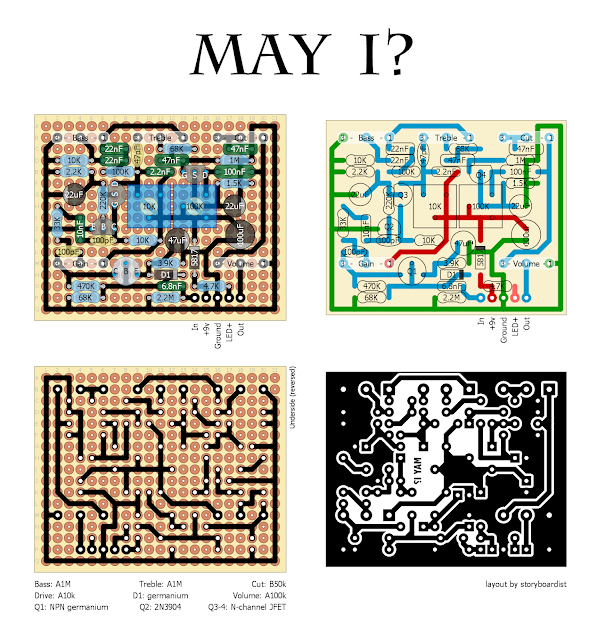 This is currently on hold till I figure out the tone control issue or someone can shed more light on this circuit. Build at your own risk.

I stumbled across the schematic for this effect and thought it was another variation of the Marshall Bluesbreaker circuit. But realized it actually predates the Marshall circuit by several years. Korg made a re-labeled version for Yamaha, the DI-01, and both still fetch decent prices. Apparently they were built like tanks. Sounds pretty decent too. Not sure what clipping diodes were used, but 1N4148s are probably a good place to start. Easy fit in a 1590B. 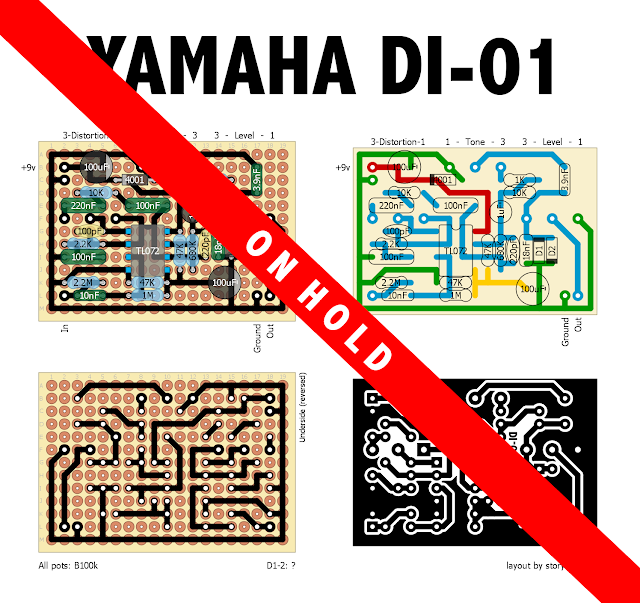 Here's a really cool and versatile dirt pedal design by Pink Jimi Photon. He's made a lot of contributions to the DIY community and whips up some cool stuff. Check this thread on FSB for the schematic and Jimi's description of the circuit. 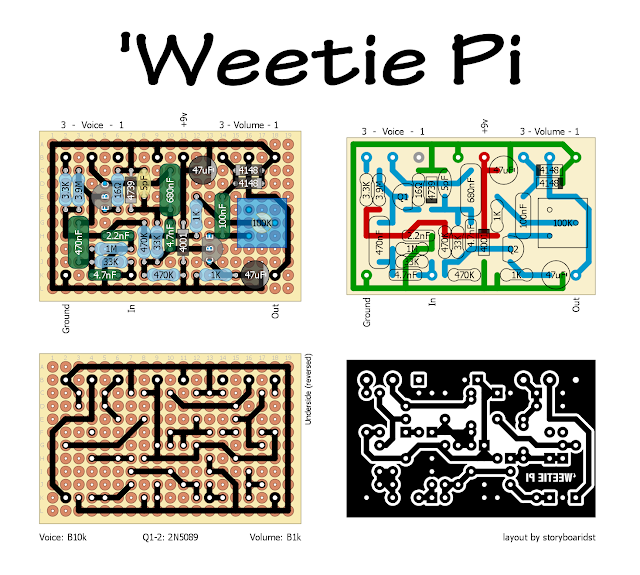 Happy Fuzz Friday! As requested, here's Bjorn's Bone Bender. Lots of great info and schematic in this doc. Should fit nicely in a 1590B. 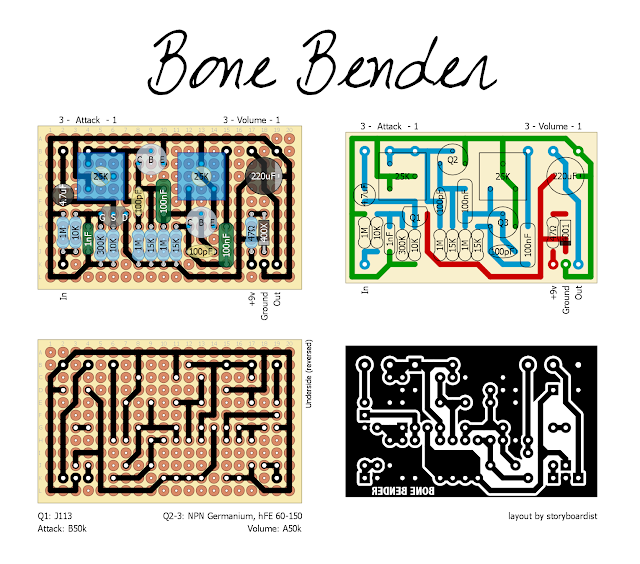 Another Marshall-in-a-box, the Ms. Foxy Brown uses 3 J201s and feels a lot like an older Run Off Groove design (though it's not). As per usual, you'll need to bias the J201s to about 4.5v and then fine tune as needed. Should fit easily in a 1590B. Schematic for reference. 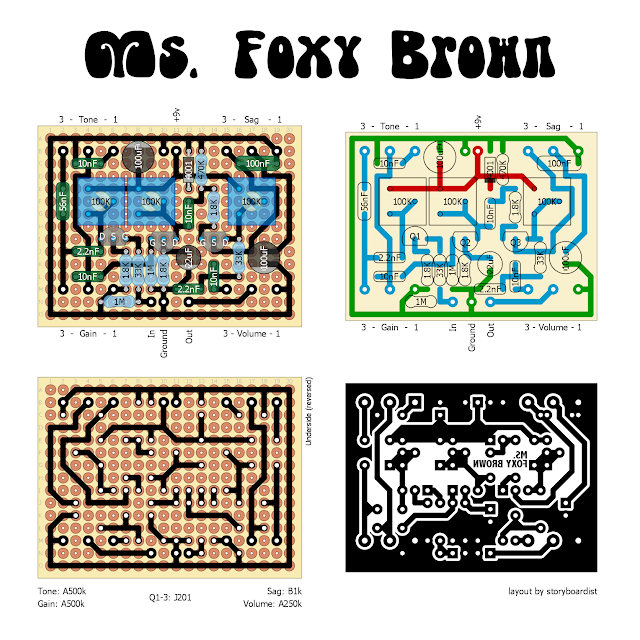 Email ThisBlogThis!Share to TwitterShare to FacebookShare to Pinterest
Labels: Amp Emulator, Menatone, Overdrive, Verified
Newer Posts Older Posts Home
Subscribe to: Posts (Atom)
Having trouble scaling a PCB transfer image? Check out the Transfer Image Library page for pre-scaled PDFs of every PCB transfer image on the site. All you have to do is download the file and print. The files are organized by brand. Those brands that do not have two or more layouts on the site are grouped together in the "Misc." folder.