The Faux Spring Reverb, like many pedal reverbs is based around a Belton reverb module. Originally it used the BTDR-1 (which is massive), but in this layout I've adapted it for the newer and smaller BTDR-2H. I've also simplified the power section a little, and used a TL071 for the second IC. In the original a TL072 was used, but only used half of it. Here's what Brian has to say about his design:

The great thing about the Faux Spring Reverb is that it retains the Analog base tone, doesn’t send your signal through digital/analog converters and back again (wrecking your tone completely) allowing you to be as springy as you like without your sound becoming lifeless, dull and… well, bad. With the tone control, you can control your sound completely and have your reverb be as bright as day, or dark as night… As lively and bright as a small hall, or as deep as the biggest cathedrals.

Edit: I realized this afternoon that the Depth pot would hit the Belton brick, so I've changed it to a 9mm pot and it will clear the brick. The whole thing will be really snug, but it should be doable. 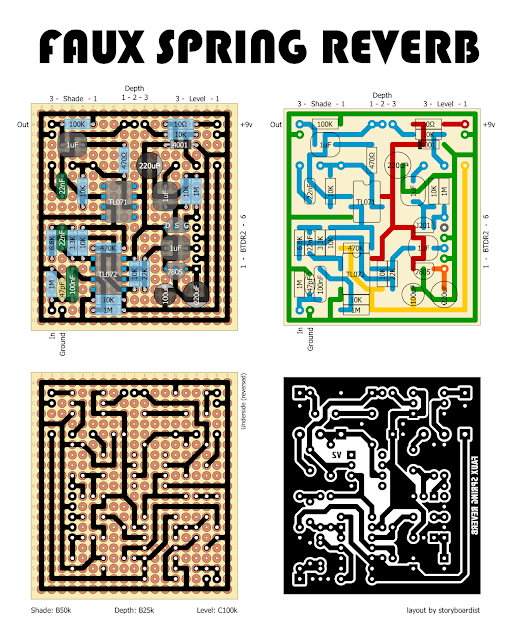 Here's an unreleased version of the Evil Filter. It's similar but not quite the same as the original. The schematic was pulled from a video interviewing DBA's Oliver Ackermann and was redrawn here. Some of the parts are a little pricey but the resulting sound is apparently amazing. 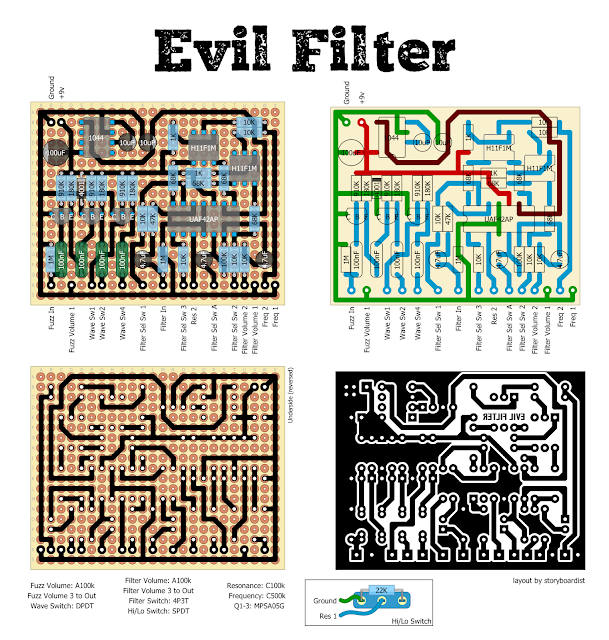 For Fuzz Friday, here's a layout for the Fat Fuzz Factory in a 1590B in a more traditional orientation. All pots are board mounted as well as the Fat Switch. For C1 and C2 you'll probably want to experiment with values. Using an on/off/on switch gives you an extra option over the original. 3.3uF is a good place to start with one of them. Just a note, whatever value you chose will be in parallel with the existing 100nF cap. Thanks to p0mp0 for sending in his layout. 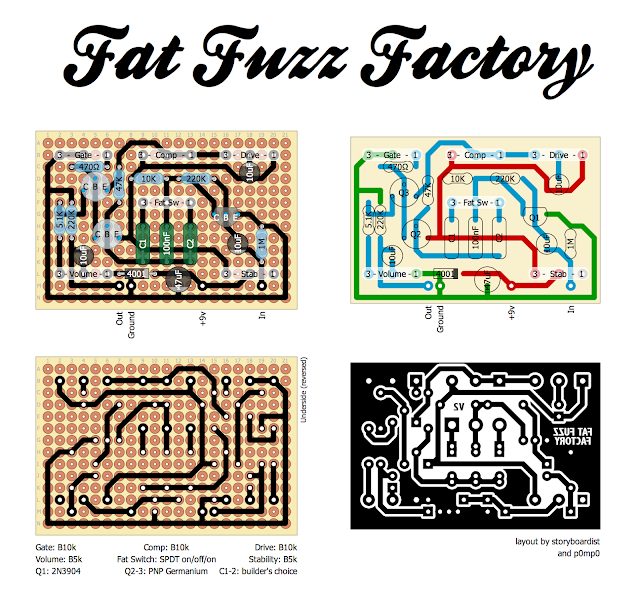 Here's the Stone Grey Distortion from Mad Professor. It's reminiscent of the Distortion +/OD250 circuit, but with a hex inverter stuck after the opamp. It also uses 2 JFETs in the feedback loop of the opamp for clipping. Original op amp is the TL051, but other single opamps can be used (Tl061, 71, etc). Should be an easy fit in a 1590B. Mind the jumper under the CB4069UBE. 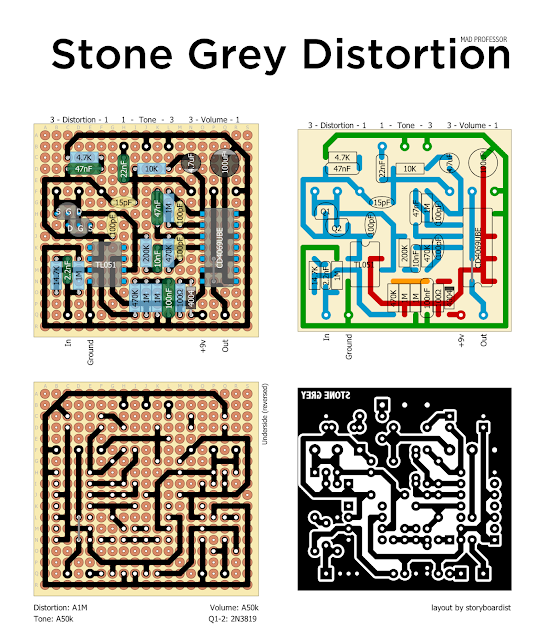 Here's JHS' Honeycomb Deluxe tremolo. Or something close to it anyway. It's a modified EA Tremolo with an extra switch to control speed and a extra footswitch to switch between speed controls. Ian McDermott came up with a work-a-like for it, so this layout follows his schematic. This layout features board mounted pots and because of the 2nd footswitch I've laid it out for a 1590BB enclosure. Also this is laid out for film box caps like these, though others will work just fine.

Got a request for the Pete Cornish Buffer in dual form like the one I did with the Klon Buffer. So here's both a single and a dual Cornish Buffer. The original uses a 1N5401 for polarity protection, but a 4001 or similar will work too. And you can probably get away with a small value on the power filter cap (220µ). 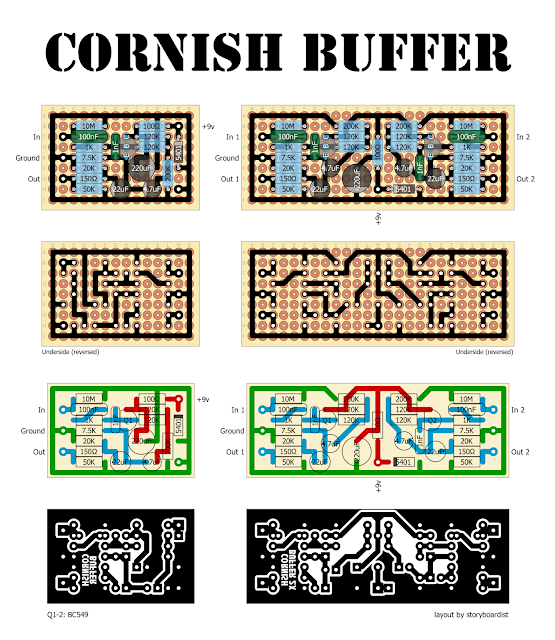 Email ThisBlogThis!Share to TwitterShare to FacebookShare to Pinterest
Labels: 1590a, Buffer, Cornish, Verified

Here's the Klon again. I wanted one with board mounted pots and for a smaller enclosure. You might be able to fit this in a 1590B with low profile jacks, but it will easily fit in a 125B. It's designed for 9mm PCB mount pots, though it might be difficult to find the dual-gang Gain pot. Look for Alpha part number RD902F-40-00. I've removed a few components that were apart of the stock bypass switching for the sake of space, so you'll want to use your true bypass method of choice with this one. 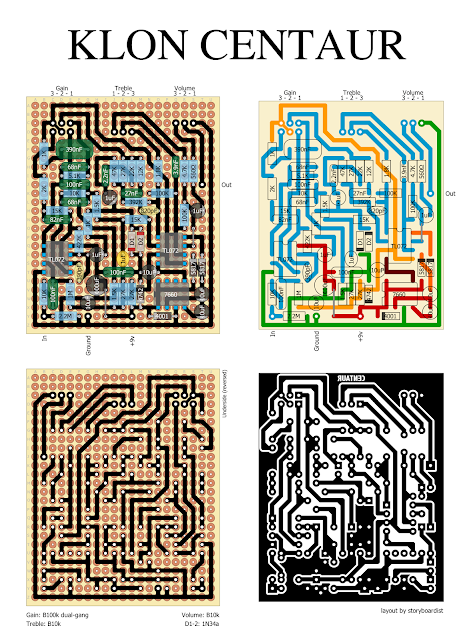 Happy Pi day! The day calls for at least some version of the Big Muff Pi, so here's the Supercollider. I think Cody's asked me to lay this one out like 3 times and I finally remembered to do it. haha This one follows the basic Green Russian Muff with a few component value changes. There's also been a Mids control added to the tone stack and a Mass control that pans between 2 different capacitors at the input. For the Mass control, originals use a B100k pot and a 10n capacitor off lug 2, but Kit Rae suggested using a B150k pot and a 4.7nF capacitor instead (and that's reflected in the layout). His schematic can be found here. There are versions of this pedal out there that include a switch for silicon or LED diodes. I'm assuming that much like the Pharaoh, this option is for the diodes in the 2nd gain stage (1N4001s in the layout below). If you want the clipping switch it won't be hard to wire that off board. 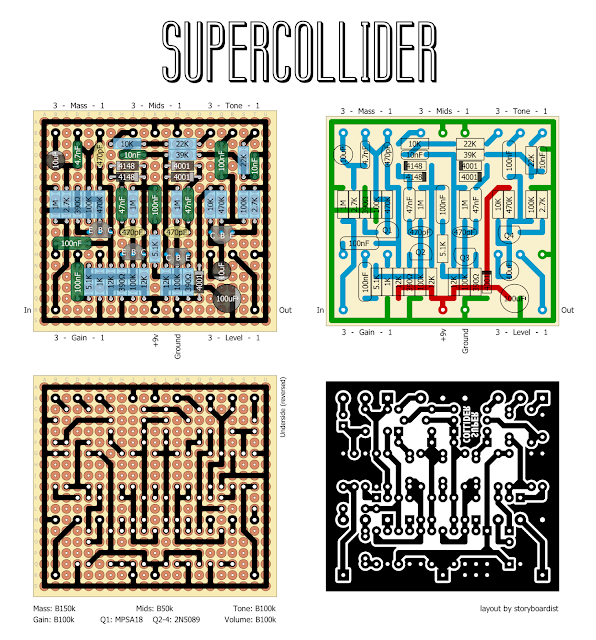 It's Fuzz Friday! Here's a cool doom-style fuzz from DeadAstronaut over on the DIYSB forum. Pretty simple and should fit in a 1590a. Schematic and a ton of discussion can be found here. 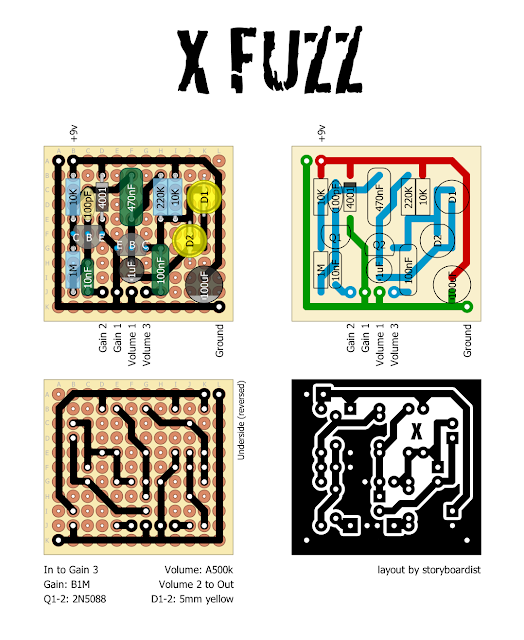 Email ThisBlogThis!Share to TwitterShare to FacebookShare to Pinterest
Labels: 1590a, DeadAstronaut, Fuzz, Verified

Got a request for this one. The schematics that come up with a Google search are all wrong apparently, but it looks like the good people on FSB have figured things out. Here's a link the the discussion and the latest schematic (which this layout is based on) is on page 5. I based this layout on the original layout from MXR, using 2, single op amps. Early versions used the 741 chip, but you can use TL061 or 71s if you want. 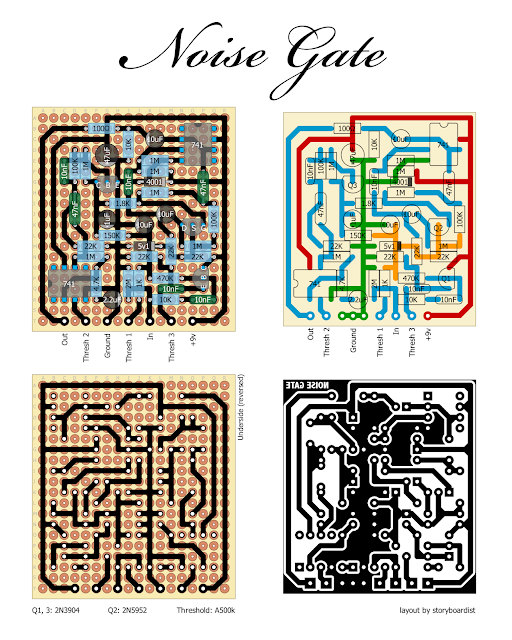 Got a request for a flanger effect, and hadn't seen many layouts for the John Hollis Ultra Flanger (that didn't have tiny thin traces anyway), so I thought I'd give it a go. For the record: flangers are hard. I knew from the get go this one wouldn't fit in a 1590B, but it will fit nicely in a 1590BB. There's empty space at the top corners you can cut into to fit around the screw posts in the corners of the enclosure if you need to. Here's the schematic and here's what John had to say about the circuit:

I was originally going to develop a minimum part count version of the EH Electric Mistress. Instead I went for a something with the versatility of an MXR flanger and the extra wide sweep that the A/DA flanger was known for. It needed an extra chip to get the wide sweep but it's worth it. Current consumption is very reasonable at around 2 to 8 milliamps dependent upon clock frequency. 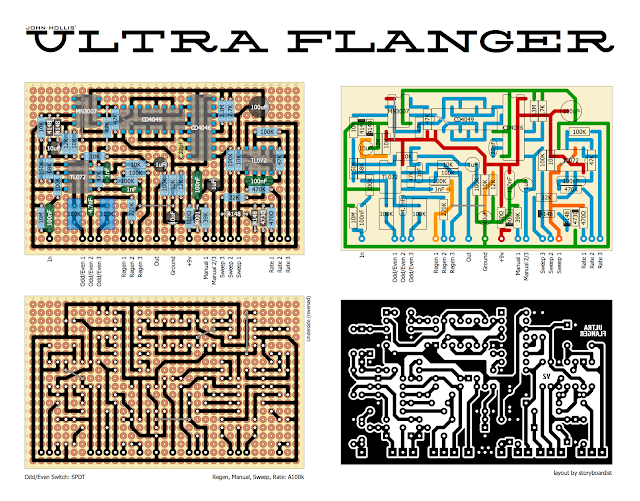 For #FuzzFriday here's the Univox Super Fuzz (again) with a modified tone stack. I'm in the middle of building this one and wanted more control over the tone than just the on/off switch of the original. This stays true to the tone of the original, but with a bit more control. 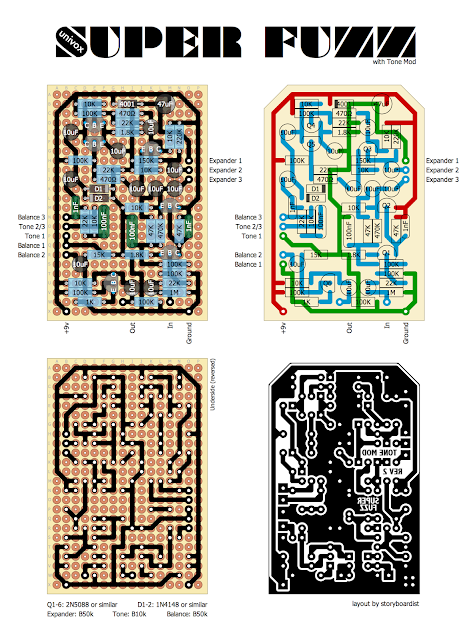 In an effort to make my own personal pedal board better, I'm building buffers at the input and output of my signal chain. As space and DC jacks are always a premium, I thought to build a dual buffer in a 1590A enclosure. The Klon Buffer is great and since it only uses half of a TL072, I figured I could just use the other half for the second buffer. It's a little tight depending on the jacks you use, but the board is small enough to mount vertically to an inside wall of a 1590A while the wall opposite can mount the 4 input/output jacks. Here's my drilling template to better illustrate. 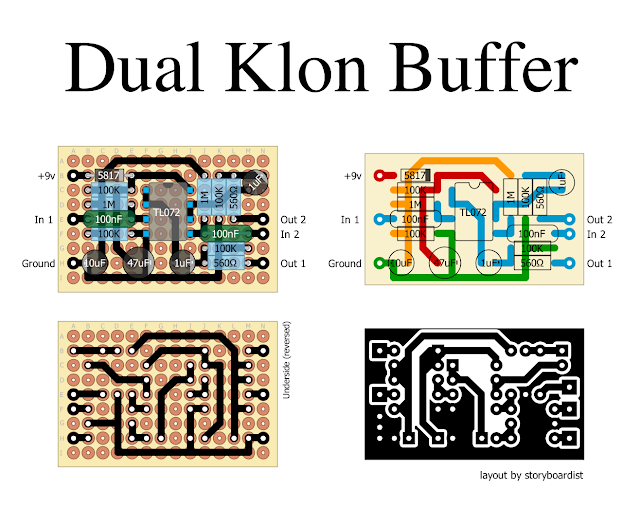 And here are a few pics of my build. 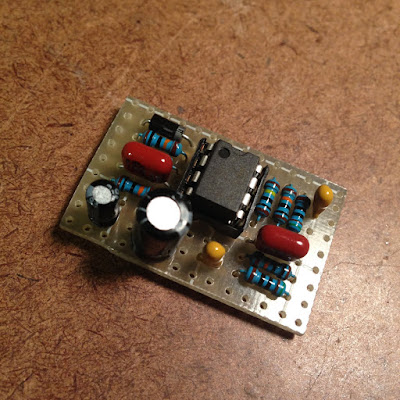 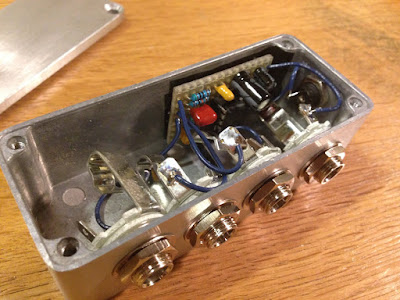 Email ThisBlogThis!Share to TwitterShare to FacebookShare to Pinterest
Labels: 1590a, Buffer, Klon, Verified
Newer Posts Older Posts Home
Subscribe to: Posts (Atom)
Having trouble scaling a PCB transfer image? Check out the Transfer Image Library page for pre-scaled PDFs of every PCB transfer image on the site. All you have to do is download the file and print. The files are organized by brand. Those brands that do not have two or more layouts on the site are grouped together in the "Misc." folder.