Found a trace of this over on the Tagboard Forum. It appears to be a highly modified Fuzzrite with an added gain recovery stage and a lot of value changes. The Saturation pot increases the output cap of the first stage, and the Fuzz pot is a pregain control. Originals use PN2222 transistors for Q1-2, which is a TO-92 packaged 2N2222A, so either will work just fine. Here's the schematic for reference and I there are fabricated boards for this in the store. 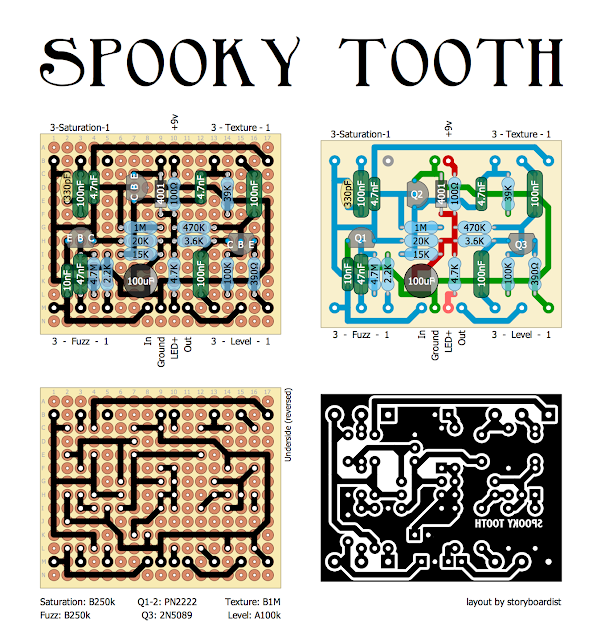 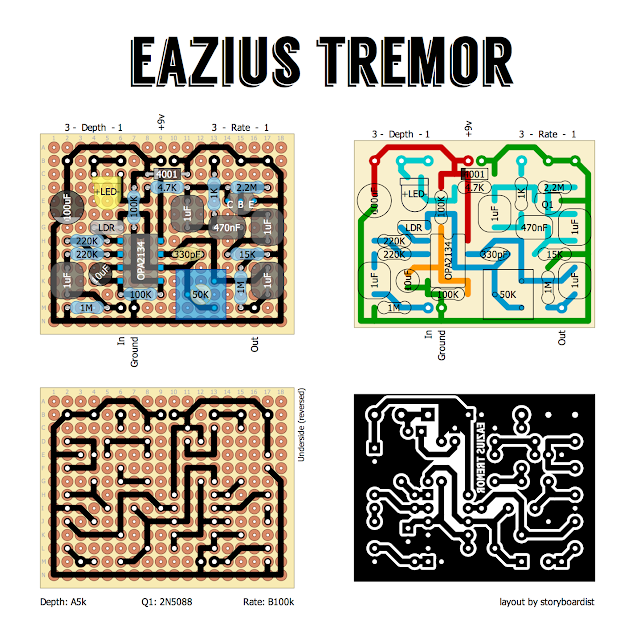 The originals used a now nearly unobtainable SAD512D chip, but the wizards on FSB converted it to work with an MN3007. Now that those are also hard to get a hold of, I've laid this out for an MN 3207–which is almost the same as the 3007, just with a slightly different pinout for power and ground. But if you want to use a 3007, I've included a daughter board that will let you use it (it will also work to use a 3207 in place of a 3007). This will best fit in a 125B and the schematic can be found here. 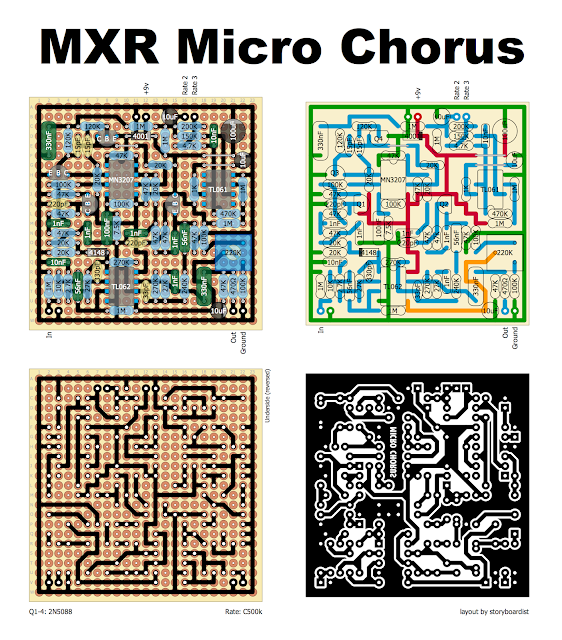 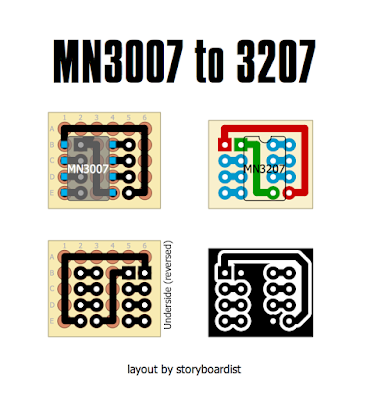 An oldie, but a goodie (I assume–Jack designs good stuff). It's a unique high gain design with a 3-band EQ. In Jack's own words:


It was made by combining the following circuit fragments: input gain stage is the Muffer, followed by the IC gain stage of the Fat Gnat, a tone control from the Fender Pro Roc amp and the output buffer of a TS-808! High gain boutique sound at its best, though not a clone of any existing pedal.
Here are some ideas for mods that can allow you to customize the sound for the best response with your gear:
Several people have complained about the low output of this pedal. The easiest fix is to change the clipping diodes to LEDs as suggested above. Not only does this increase the output but it also allows better control over the range of clipping. If you want slightly more output and some added even harmonics, just replace one of the clipping diodes with an LED - doesn't matter which one.

Here's the schematic for reference. I laid it out for board mounted pots in a 125B with top mounted jacks. 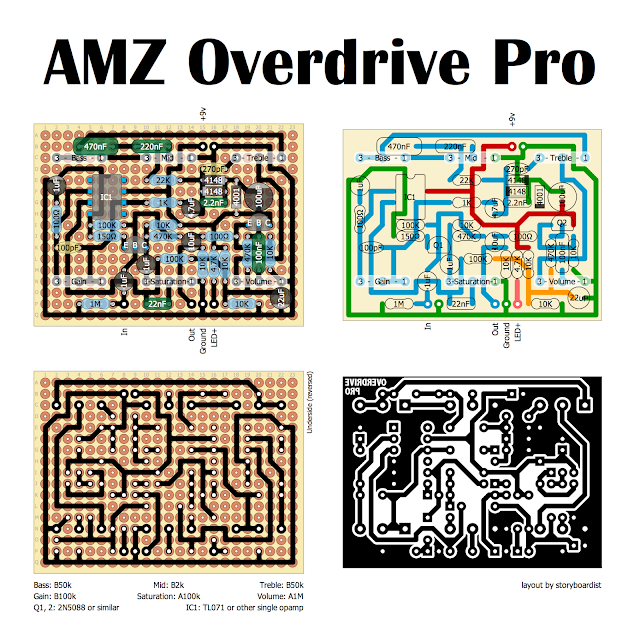 Here's another Devi circuit for Fuzz Friday–the Ruby. It's essentially 2 Electras (sans clipping diodes) stacked. In Devi's own words, "The Ruby is like a Tone Bender, but way classier and secretly more misogynistic." 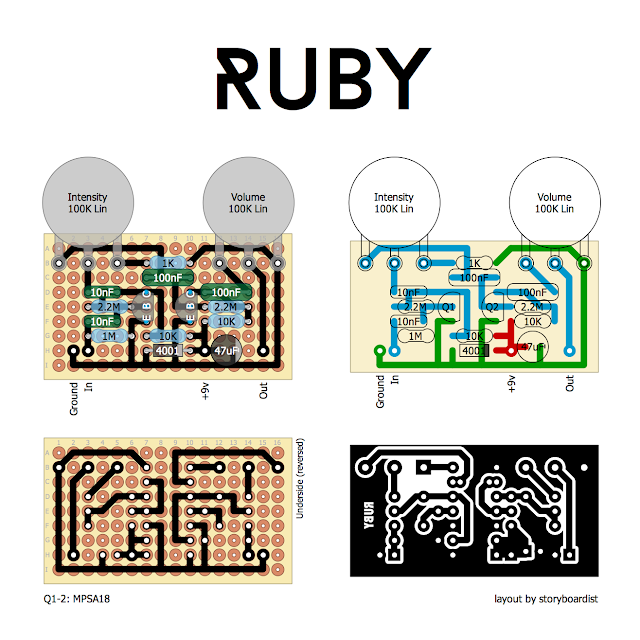 Email ThisBlogThis!Share to TwitterShare to FacebookShare to Pinterest
Labels: Devi Ever, Fuzz, Verified

Here's a simple bass preamp circuit derived from the Sunn 200S using JFETs. It's pretty similar to the Bassman Preamp, but with the EQ section at the end of the circuit instead of the middle. Original S200S amps didn't have the Mid control, but it's kind of necessary IMHO. Bias the JFETs to 4.5v and adjust to taste. Not sure if the BAT85 diodes are necessary as they're not in the Bassman Pre, but I left them in just in case. Also not 100% sure if the below demo follows this schematic exactly, but it should be in the ballpark. Should fit nicely in a 1590B. 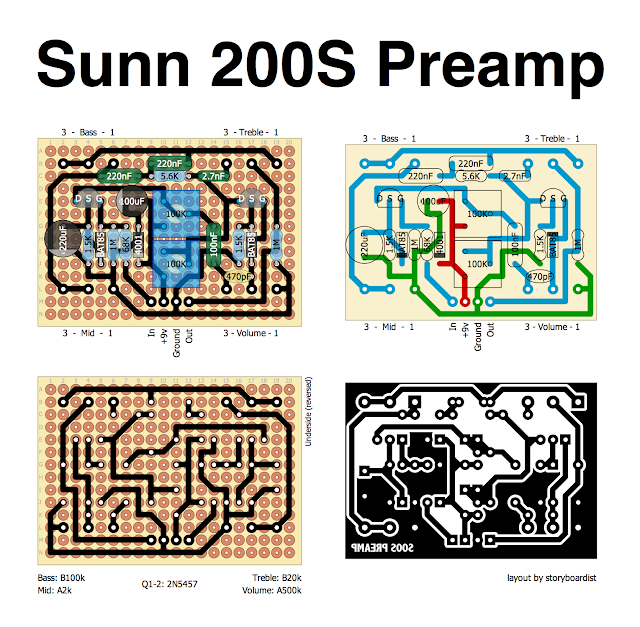 Haven't done a Devi circuit in a while, and I keep stumbling across them, so here's the Dark Boost. It's essentially an Electra circuit without the clipping diodes and a Pre-Gain control. Apparently works pretty well on bass too. 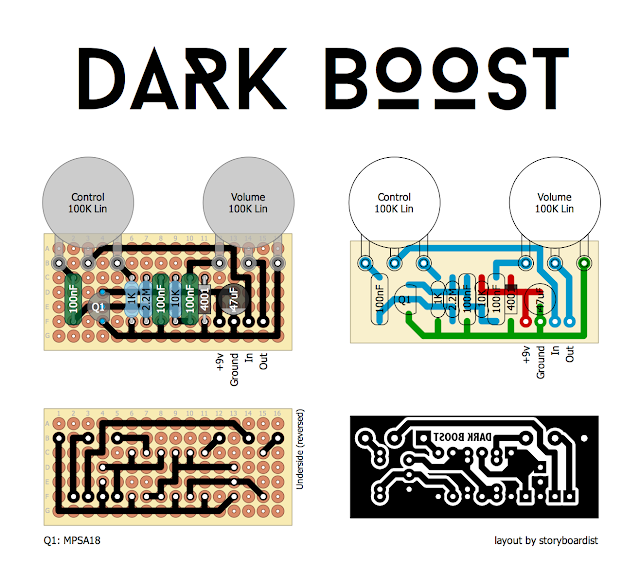 Here's a newer version of the Marvel Drive from Ramble FX. Did the first version of this circuit a couple years ago, and decided to update the layout with board mounted pots and the Presence pot.  I believe the only difference between V2 and V3 is a switchable internal LT1054-based voltage doubler in the V3. Given that those can be somewhat expensive and I know you all have different preferences when it comes to voltage doublers, I've left the charge pump out. If you want to make a V2, just ignore all this chatter about voltage doublers and just build the layout below. If you want to make a V3, wire lug 2 of a SPDT toggle switch to the +9/18v pad of the layout below, then wire lug 1 to +9v and lug 3 to the output of your voltage doubler. Here's the schematic this is based on. 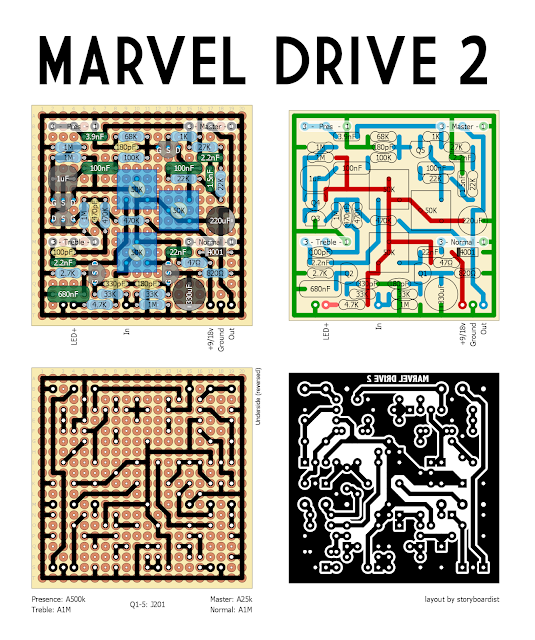 Email ThisBlogThis!Share to TwitterShare to FacebookShare to Pinterest
Labels: Amp Emulator, Overdrive, Ramble FX, Verified
Newer Posts Older Posts Home
Subscribe to: Posts (Atom)
Having trouble scaling a PCB transfer image? Check out the Transfer Image Library page for pre-scaled PDFs of every PCB transfer image on the site. All you have to do is download the file and print. The files are organized by brand. Those brands that do not have two or more layouts on the site are grouped together in the "Misc." folder.