The Cardinal Trem is a harmonic tremolo designed by Jon Patton and meant to emulate the tremolo effect built into several Fender amps from the early 60s (Twin, Super, Pro, Showman, etc). What makes it harmonic? The audio signal is amplified by the first JFET stage, then split into a high-pass path and a low-pass path. Each path is modulated optically with the vactrols, then amplified and mixed into the output. The LFO is designed around a quad opamp (in the original it's a quad, I had to divide it into 2, dual opamps to make it fit) and pulses the LEDs in the vactrols. Schematic and full circuit explanation can be found here.

The L pad will need to be grounded in some fashion for the LEDs to pulse. LED1 can be used as an external rate indicator, either on all the time or as the on/off indicator as well. Jon recommends using optical bypass for this effect (hence doing the Optical Bypass layout on Tuesday 😁), so to use LED1 as the indicator LED, connect it to both pads for the LED on the Optical Bypass board and ground the L pad. If using a 3PDT, just connect the L pad to lug 4 and lug 5 to ground as outlined in the General Layout Notes page. 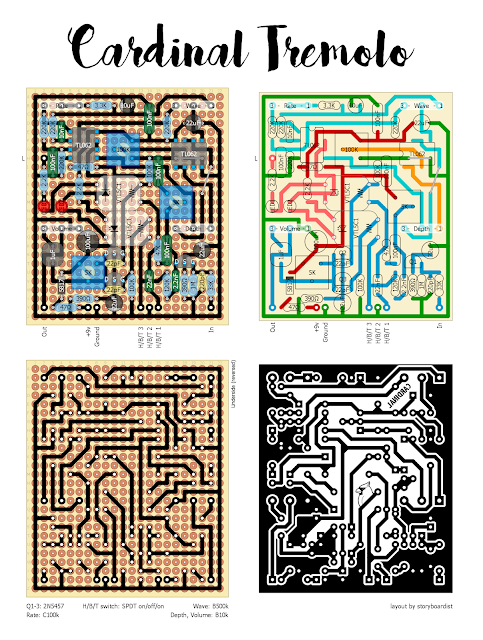