I stumbled across the schematic for this a while ago and have been meaning to lay it out for a while. It's Fred Brigg's souped up version of the Fulltone OCD. Here's what he had to say about it over on his blog:

The "Super OCD" has a few extra controls:- Firstly the "Bass" control - it's nicked from Paul C's Timmy pedal and works very well to add in pregain bass for more low end response.- Secondly the "Saturation" control, this allows you to increase the clipping headroom of the circuit and have an overall "cleaner" tone while dialling in just the required amount of diode clipping.- Thirdly the "Boost" control, I've configured the second opamp to allow a range of clean boosts to be selected to really allow you to push the front end of your amp into overdrive.- The final control I've added is a switch to go between 9 volt and 18 volt operation. The 18 volt operation adds extra headroom to the circuit to stop the opamp clipping from fogging up the tone. The 9 volt operation retains the original headroom seen in the OCD.- Other changes include alterations to the Tone control and a swap of opamp from the TL082 in the original OCD to the Burr Brown OPA2134. These changes all add up to create a really nice overdrive/distortion box. It's got all the original Fulltone OCD tones in there and loads more. If you like the original OCD you'll love the Super OCD.

I've laid this out for board mounted pots (from the solder-side with right angle PCB pots) and it should fit in a 1590B. (Though when I build this thing, it's definitely going in a 125B haha) 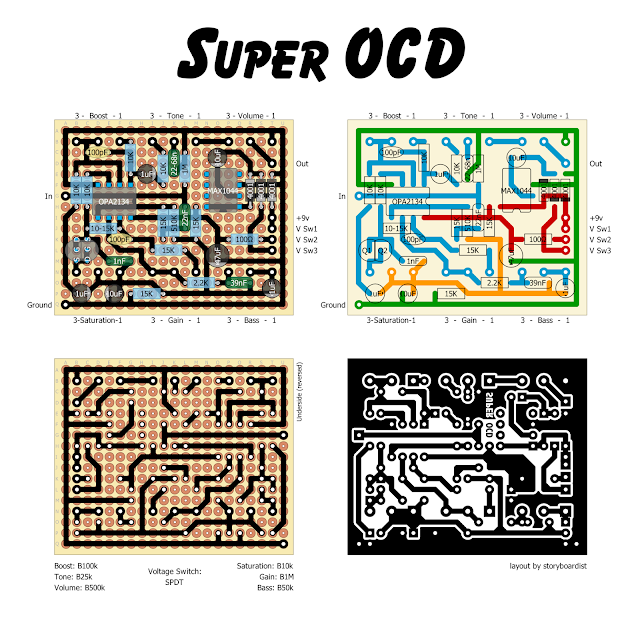