I got a request for a layout of the Big Muff that could be used to build the Triangle, Rams Head, Green Russian, or NYC versions. While it shouldn't be that hard to take one of my previous layouts of the BMP and make the value changes, I thought I'd make a more detailed project than I normally do. First, let's start with the schematic. This is the basic circuit used by pretty much every variation of the Big Muff (excluding the IC Big Muff):

The only difference between versions is a handful of component values. Generally, the circuit was tweaked to work with whatever Mike Matthews had on hand. As a result, there are about 18 different variations produced by Electro-Harmonix. Now, not all of those variations sound all that good. But over the years several really good sounding Muffs have been traced and their component values posted on the web (mostly on Kit Rae's awesome Big Muff site). The 4 versions specified in this project seem to be some of the most popular and best sounding Muffs.

The component names in the schematic above correlate to this layout: 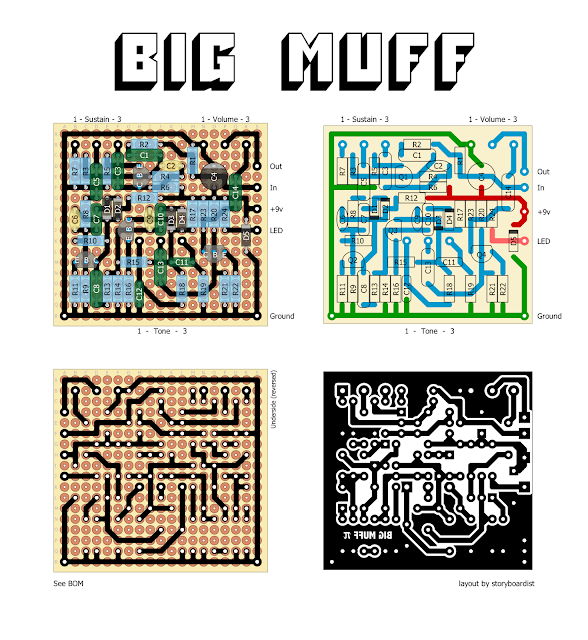 For a full BOM for all 4 versions, download the file linked below. In addition to the BOM, it contains scaled transfers for etching your own circuit board, as well as a scaled drilling template for building the effect into a Hammond 1590B enclosure.

If a BMP variation you want to build isn't specified in this project, use the above schematic and compare it to the schematic of your desired version to figure out what components go where.

Updated Sept. 2, 2015 to correct schematic, placement of Tone pot, and drilling template.
at 9:08 AM