Here's another layout with onboard pots. The Sola Sound Tone Bender Mk. II is probably most famous for shaping some (but not all) of the guitar sound of legendary guitarist Jimmy Page on Led Zeppelin I. Originally it was a positive ground effect, but I've laid it out to use NPN transistors. This way you can daisy chain it with normal negative ground effects, or avoid using a 9V battery or making a voltage inverter. I've added a polarity protection diode and a pulldown resistor at the input. I would also recommend as I did with the Fuzz Face, to swap the stock B1k pot controlling attack with either a C1k or B2k pot for better control. 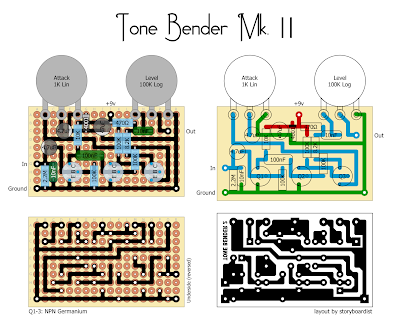 The hfe of the transistors should be around 70 for Q1 and 2, and 100 for Q3 (according to Fuzz Central). I've personally had good luck with some Russian MP38a transistors. You can also build the Marshall Supa Fuzz with this layout by making the following substitutions:


You can also use this layout to make the original positive ground effect using PNP transistor by just inverting any polarized components (basically just flip around the 3 electrolytic caps and diode).
at 7:07 PM