You might look at this and think, "Gee, it's just another Fuzz Face," when in actuality, this pedal pre-dates the famous Dallas Arbiter stombox. (This is different from the Sola Sound ToneBender Mk I, as the Sola Sound has 3 transistors.) It was made in Italy for Vox and sounds like a Rangemaster and Fuzz Face combined, due to its smaller input and output capacitors. This is also the same circuit as the D*A*M 1966 Italian Tone Bender. I've added a 10k trimmer in place of the stock 8.2k resistor to dial in the bias for Q2 (a 20k trimmer might give you more tweakability), but on the PCB there are pads for a resistor in place of the trimmer if you prefer to go that route. Also, I've added a pull down resistor at the input, and polarity protection and power filtering. Note that this was originally built with PNP germanium transistors and was positive ground. The perf side of the layout reflects this, while the PCB side reflects negative ground for use with NPN transistors. 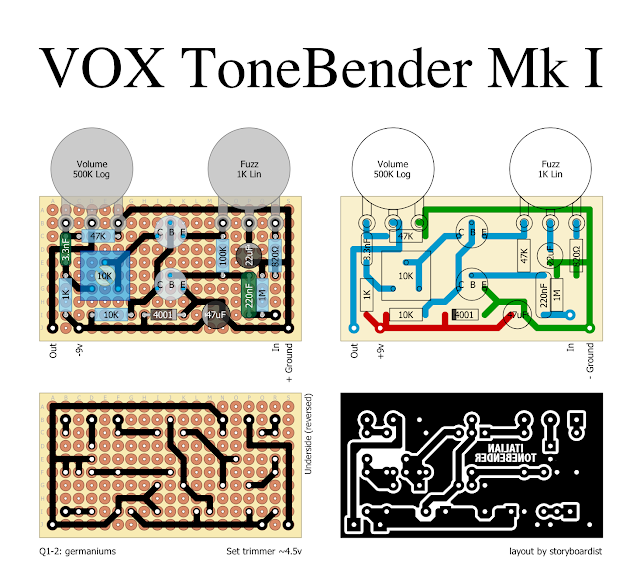