I guess I'm about 15 years late to bypassing effects using this method, but I thought I'd post it anyway. Like most builders, I generally use a 3PDT footswitch for most of my builds. However, I recently purchased some DPDT footswitches to use on a few effects that either use a weird way of switching (Crowther Audio '77 Hot Cake) or have a built in buffer (MOD 'Verb Deluxe, Pearl/Vorg Warp Sound). I found that the "click" made by these DPDTs was far quieter than the "kuchunk" made by regular 3PDTs, and wanted to use these quieter switches on a few builds. So, I decided to investigate the Millenium Bypass designed by R.G. Keen. So for those of you who like the quieter click of the DPDTs or if you just have a bunch of them kicking around your parts drawer, this layout is for you. I've drawn 2 versions: one is a small daughter board you can mount the LED directly on (perf and PCB), and the other is for PCB mount DPDTs that will cut down on the offboard wiring. 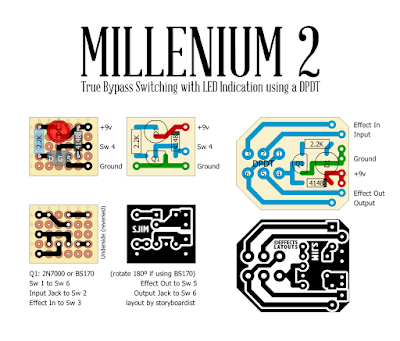