Here's a great sounding Fuzz Face variant from FSB forum member Hozone (Davide Gironi). If you're feeling adventurous, you might be able to fit it in a 1590a. He originally used a 2N5088 for Q1 and a BC547 for Q2, but I would socket and experiment with what you have on hand. Here's what he had to say about it on his blog:

It's a standard silicon Fuzz Pedal circuit, made up using two common NPN transistors, the BC547, and the 2N5088. I've tried to "take it to the limit", to produce an extreme distortion clipping sound. There are three control points on this pedal:

It's called "Radio France" Fuzz, cause while playing with different components values on my breadboard, i can even even hear a radio transmission from France (likely AM), which is pretty distant from where i live. Luckily this doesn't happens on the perforated board, but it was enough for me to call it Radio France Fuzz. 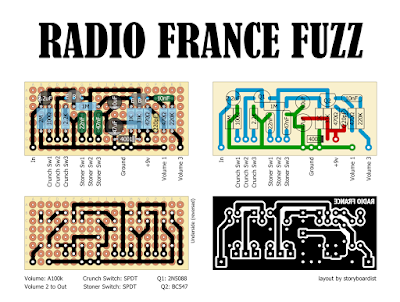 Email ThisBlogThis!Share to TwitterShare to FacebookShare to Pinterest
Labels: 1590a, Fuzz, Verified