The Folk Driver is a low-medium gain overdrive developed by SoulSonic FX after being challenged by Björn Juhl (of BJFE) to create a DIY project inspired by sound of the BJFE Honey Bee. Here's what Martin (soulsonic) had to say about it after designing the circuit back in '09:

My goal was to keep the design as simple as possible, but still try to fit in some tricks. This uses both positive and negative feedback to get its sound. R8 [100k resistor between emitters] is something I learned from the big old red RCA book – it’s positive feedback to boost the gain of the first stage; it was suggested as an alternative to using cathode bypass capacitor in a tube stage, well, it works just as well with a transistor. The combination of R9+C4 [100k and 470p in series from Q1 emitter to Q2 collector] is negative feedback to reduce the high frequency gain and give the signature smooth sound. It also promotes stability in the circuit. I settled on the clipping diode combination after trying several different kinds, and the 1N4001+1N4148 combo had the best sound for this thing and reminded me most of the HB.

The Timbre control adjusts both the low-frequencies and the amount of drive. At the 12 o’clock position is the minimum drive amount. At one extreme it’s max gain with lows emphasized, and the other is max gain with the lows cut. It’s sort of like having the HB’s Gain and Nature controls on one knob. 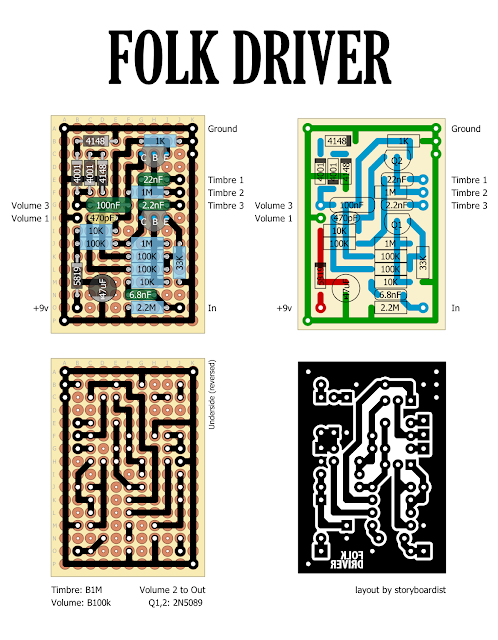