Here's the layout for #fuzzfriday! The F-1 Fuzz Tone is one of Kay's budget effects from the 60s housed in a plastic treadle pedal. Essentially it's the poor man's Univox Super Fuzz. The treadle would control the Tone pot, with the overall level of the effect fixed at max. This isn't that big of an issue as output is around unity. The circuit can also produce an octave effect as well. Originals used BCE pinout transistors, but the layout below reflects the more common CBE pinout. Originals also used germanium diodes, but silicon can also be used. 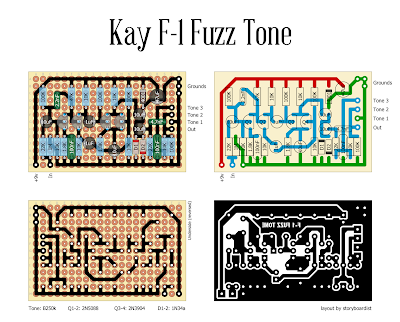 Mods:
If you want to add a volume control, start with a 100k pot (other values may work better, that's just what I'd try first), connect lug 3 to the Out pad on the board, lug 2 becomes Out, and ground lug 1. It may also be useful to add a pre-gain pot at input. Again start with a 100k pot, lug 3 becomes the new In, lug 2 goes to In pad on the board, and connect lug 1 to ground via a low value resistors (470Ω, 1k, etc). No idea how useful these mods would be, just a few basic things that came to mind as I laid it out. If you're adding a Volume control, it might not be a bad idea to put a booster (LPB-1 would work well) between Tone 2 and Volume 3. YMMV
at 9:30 AM