This is a pretty unique fuzz from the mid-70s by Univox. It was designed by Shin-Ei and like a few other Shin-Ei designs it can suffer from volume loss. To get it back up to unity or above, DIYSB forum member LucifersTrip made some mods to the circuit that keep the original sound, but improve the circuit a little bit. (Here's the original schematic, and LT's schematic for reference)

Volume problem:To increase volume, I slowly increased the vol pot. Even at 1M, it was still below unity. So, I added diodes in parallel. Finally it was above unity, but now the distortion (really a tone control...closer to 0K the more bassy) didn't give me a good sweep.  So, I simply increased the 27K cutoff to 100K and subbed a 1M distortion pot instead of the 250K. Beautiful!  That gave me a nice sweep from just barely too bassy to a nice thin fuzz.Mild Gating Problem:Anytime I see an odd small value from an emitter, base or collector to a rail, I always suspect it to be very sensitive, and it was...I slowly increased from 0K and hit a perfect spot around 2.6-2.8K. The mild gating and pick percussion were gone, resulting in a killer smooth fuzz with super long sustain.  It was nearly perfect, but a bit too harsh on the highs. A simple tweaking of the 680 gave me a sweet spot right around 1.8-2.2K. If you raise it much higher, you'll wind up with less power...and around 4-5K will start to gate again. Further, I increased the 2M to 3M, which gave a bit more richness to the higher strings. I tried up to 7M...still good (thicker on the high strings)  but I didn't want to take a chance it would change the tone too much.

Here's a demo of the original: 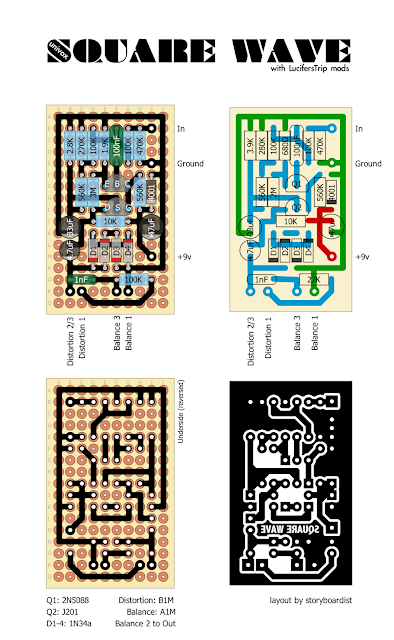 If you want use this layout to build the SquareWave to original specs, follow the below value changes:

Email ThisBlogThis!Share to TwitterShare to FacebookShare to Pinterest
Labels: 1590a, Fuzz, Univox, Unverified