The Ghost Echo is a nice little reverb unit, and uses the Belton BTDR-2H-L digital reverb module, as well as a PT2399. I'm not going to lie, this layout gave me some issues (at one point it made DIYLC crash). Even had to use a jumper (which annoys the heck out of me, as you may have picked up on). You won't be able to squeeze it into a 1590B, but a 125B should be a good fit. The Belton brick can be mounted directly to the board from the solder-side.

Vintage spring reverb emulation capable of providing a little atmosphere all the way through to vast depths in one tiny box. The attack control sets the delay of the initial pick attack on the wet signal only. When playing staccato this registers as a slap back type echo hitting the reverb but when playing fluid lines it adds a massive depth and “fattens” up the sound. The dwell control is a fine tune function that enhances the decay and the depth controls the intensity of the reverb. 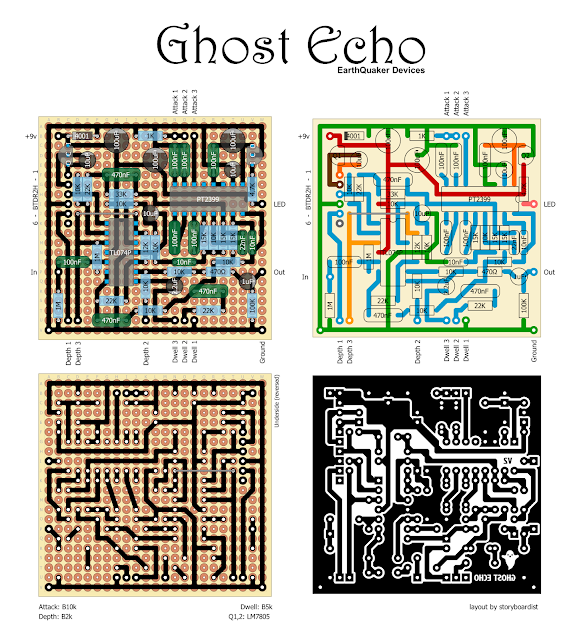 Update: If you're having a hard time getting unity volume, try replacing the 10k resistor of pin 9 of the TL074 just above the 2.2uF cap with a 17k resistor (or something close to that).