Here's nice delay from CultureJam. It's based on the Rebote 2.5 delay and has a lot in common with many other PT2399 delays. However...

The Triton, diverges from the base concept by adding a second Delay Time potentiometer and a unique (in the DIY world) modulation effect. The Delay pots are selectable via footswitch (latching), and when switching from one time setting to the other, the delay time change happens slowly, just as if you were manually turning the delay time pot on a standard delay pedal. This causes a gradual pitch bend that slowly resolves to unison if a note or chord is struck and held when toggling between Delay pots. To control the speed of the pitch bend/resolve, there is a pot labelled “Slow”. Making the transition speed slower also makes overall delay time longer.

This is version 3.1 of the Triton, and includes all controls externally (the original PCB by Pickdropper had the Tone pot as a trimmer). Here's the schematic for reference, and the demo below is of an older version, but you get the idea. 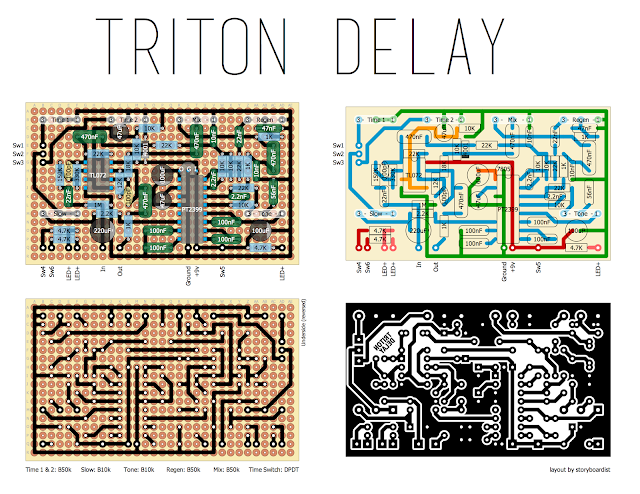 In case it's not clear in the layout, the Time Switch is the 2nd footswitch.
at 9:30 AM