Fuzz Friday! Here's a cool fuzz based on the old Supro Thunderbolt amp using NPN germanium transistors by RnFR from the Apocalypse Audio blog. Here's what he had to say about it:

I have been thinking about modeling the Supro Thunderbolt with FETs, but then thought- I just got in these cool new Tesla GE's, why not use those? So that's what it is, the preamp section of the legendary amp used by Page and supposedly Hendrix, done up NPN germanium style. I had to eliminate a few resistors towards the end to bring up the volume and lowered the value of an emitter resistor to up the gain a bit. Also, I made the resistor on the input variable so you can adjust the input impedance for guitars with different pickups.The real gem of this circuit is the tone pot- totally counter-clockwise you get a nice full range tone with plenty of mids. As you go clockwise it goes to a very muffled tone, and as you go even further, it goes to a very thin, cutting tone. There are some very cool sweet spots, and a lot of versatility. I like it better than a regular muff style control, but it does cut plenty of signal- hence the two gain stages after it.It's a cool sounding circuit. Nicely voiced and does a good overdrive type sound. If you don't have the trannys, you could change out the 33K Rc's to trimmers and adjust to taste. The Tesla trannies are extremely consistent, so no trimmers needed.


Here's the schematic for reference. 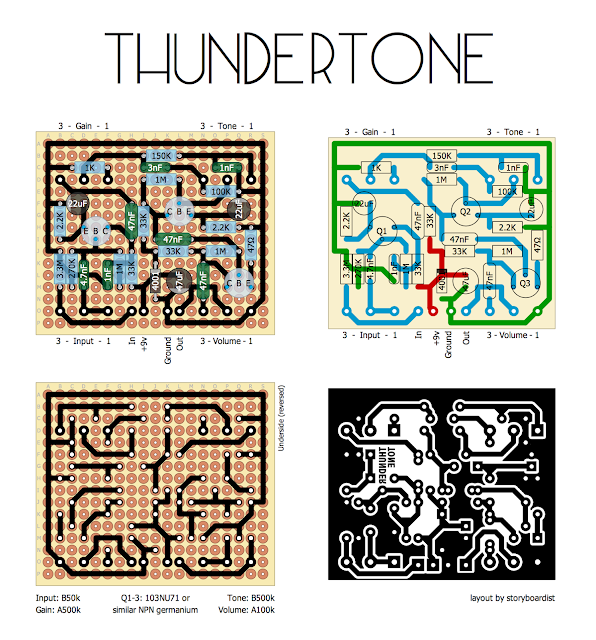