Here's a synth circuit from Paul in the Lab (schematic and sound samples can be found over there). I've laid it out for board mounted pots with the board vertically in the enclosure. See the drilling template in the library for a visual. Here's what Paul had to say about it:

This is a project based largely on the put up or shut up mentality, for quite some time I've been getting annoyed at seeing youtube videos of people pissing about with these "synths" which are basically boxes of 555 timers with a million knobs that make stupid noises that you couldn't ever actually use in music so I thought I would make my own little synth that would get repeatable sounds and be useful in music and what better type of synth? a droner type - basically cause I love bagpipes - I like drones.
Anyway the circuit itself is quite a simple one basically because I only designed it during the week, all it is really is 3 triangle wave generators configured to operate in the audio range going into a mixer op-amp configuration with the odd filter here and there to soften the waveformsI've used LM358 op-amps cause they are the cheapest, I'm not too sure if others would work in the same way though they probably will.Why call it the devils triangle - well it has 3 oscillators one of which can oscillate a slightly high pitch range (for melody) it also sounds demonic so the name fit. 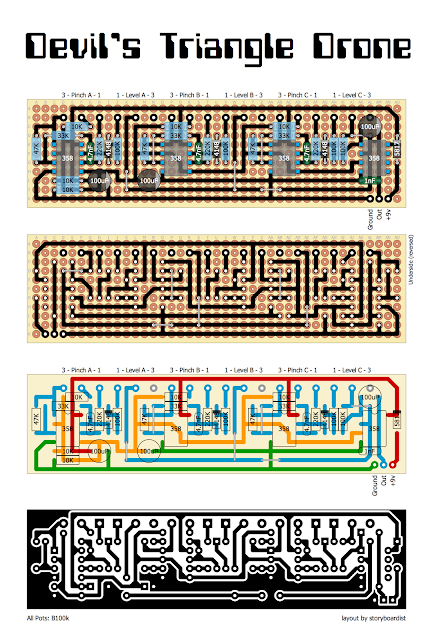