A lot of awesome things came out in 1977: the op amp version of the Big Muff, the grey box DOD250, Fleetwood Mac's Rumours, the Sex Pistol's Never Mind the Bullocks, and STAR WARS (May the 4th be with you). The Crowther Audio Hot Cake also made it's debut in 1977, and you could say it was one of the first "boutique" stompboxes ever made. It featured an 741-type IC and a unique way of bypass switching. To quote Steve (bajaman) from FSB:

To add an LED on/off indicator, I would suggest using a DPDT switch. One side can be used to bypass the effect, and the other side for the LED.

As many know, an updated version of the Hot Cake was released in 2003. This has a presences control instead of the mids lift/normal switch in the original, and has a more Fender-like sound compared to the Marshall-like sound of the original. Many say that as you turn the drive control up, the tone gets muddy, but with the volume cranked and lower drive settings, the Hot Cake really shines. I've added a polarity protection diode, a power filtering cap, and a resistor for the LED on the board. For more info, check out the FSB summary page. I've also created a fabricated board for this circuit in the store—the Crempog. 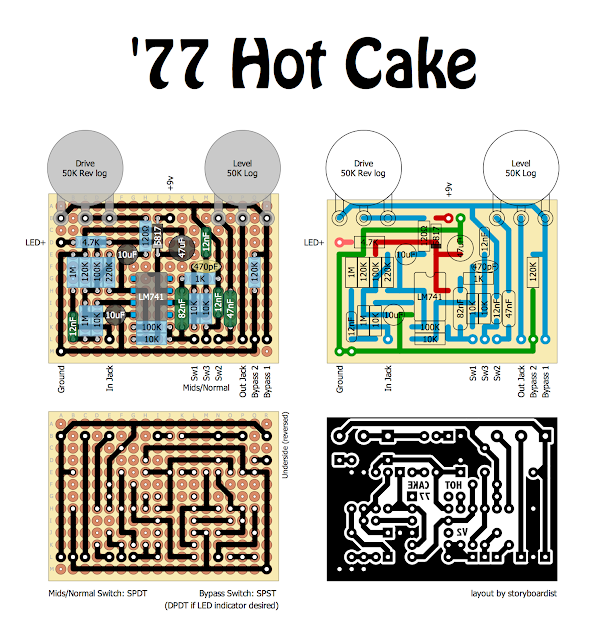