Found this one over on DIYSB and thought it'd be a good Fuzz Friday layout. It was designed by Dragonfly for the old FX-X contests. Here's what he had to say about it:

The Heavy Darling is a SIMPLE fuzztone that cleans up great, has old school character, and good sustain...pretty much ANYONE who can solder should be able to build this one. It uses a MPSA13 Darlington transistor in the 1st stage that pushes the 2N3904 into full saturation. The 220k resistor limits the amount of saturation, and you could certainly experiment with values here. A pot could also be used to give some variable gain, and you could even set up the pot in a similar manner to the Orpheum, Fuzzrite, and Shin-Ei style fuzzes. 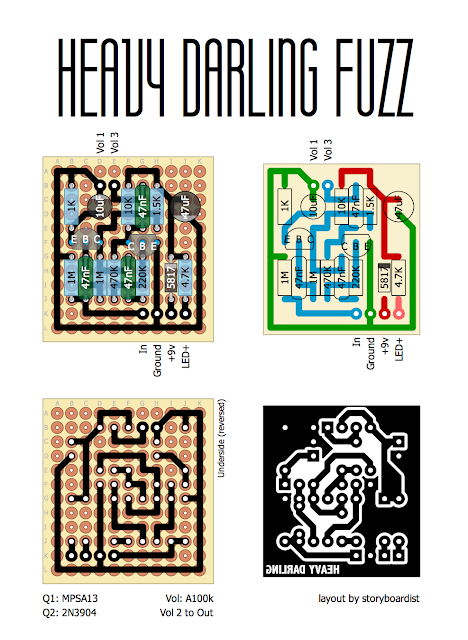 Email ThisBlogThis!Share to TwitterShare to FacebookShare to Pinterest
Labels: 1590a, Dragonfly, Fuzz, Verified